Check out our in-depth guide on 70+ veggies list which guinea pigs can & can't eat! 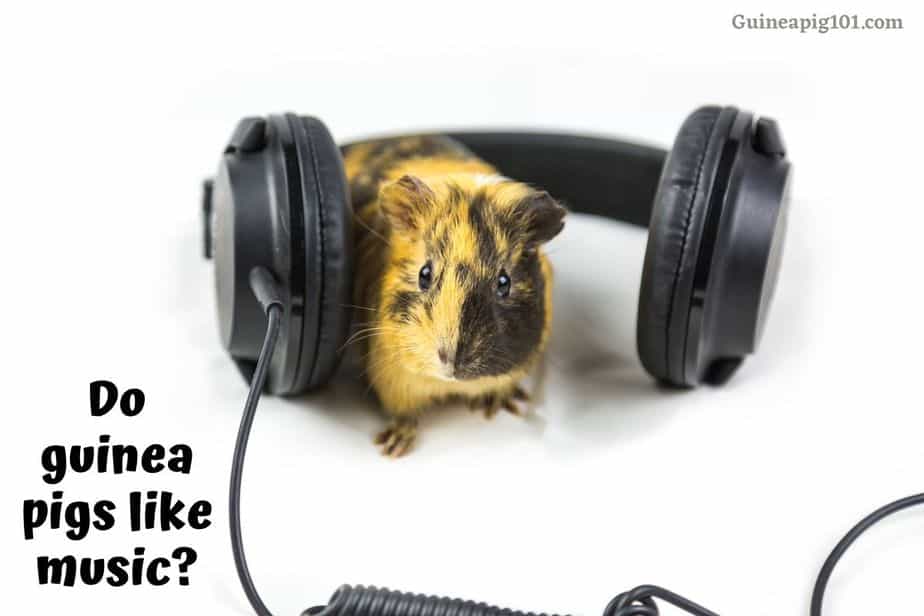 Several studies are conducted every year to find the relationship between music and pets. Many research claims that music can be useful in calming down our pets.

While some animals enjoy it, others don’t. How about our guinea pigs? I did some research on types of music, and it’s effects on guinea pigs. Here is what I learned.

Since guinea pigs live with humans, they are going to be exposed to music at some point in time.

Whether it’s a holiday season or a birthday party or some other occasion, you will be playing music around your guinea pigs. Some guinea pigs enjoy it a lot; others experience discomfort and stress out.

You might need to watch out their behavior to decide whether they are enjoying it or not.

If you see any signs of distress, then you might need to look for other music alternatives or avoid playing it around them.

If you notice your guinea pigs grooving, closing eyes, or making sounds like purring, then you can say that they are enjoying it.

However, if they feel scared or stressed out, then you might need to change the genre of music altogether.

Recommended Supplies For Guinea pigs: Our Top Picks!
Before you learn more,here are some hand-picked supply deals for your guinea pigs that you should definitely check out:

No, guinea pigs don’t enjoy being in loud noises. They have a strong sense of hearing and can listen to a wide range of sounds.

Thus, playing loud music around your guinea pigs can be stressful for them.

Although a short exposure to loud noises is not harmful to them, longterm exposure can harm their hearing ability.

Research claims that guinea pigs have better sensitivity to sound than humans do.

They use this ability in the wild to escape from predators. Even the slightest noise of movements that humans can’t notice won’t escape through guinea pigs.

However, that also means that what sounds normal for us may be overwhelming for them and what’s loud for us can be unbearable for them. Thus, it is a wise move to avoid loud noises around guinea pigs.

Mild music with some calming sounds of water, bells, chimes & other rhythms works excellent around them.

How loud should I play music for my guinea pigs?

When adapting your guinea pigs to the music, it would be wise to start with a low sound level.

Follow a golden rule that, You should “Never play music louder than your television.” also, make sure the music you play doesn’t have too much fluctuation in frequencies.

For example- If the music starts with a mellow piano or violin and ends with a screeching guitar, then such music can frighten your guinea pigs.

Make sure the frequency of the sound is somewhat stable and consistent. You can start with a lower sound level and increase it gradually up to some extent.

Do watch the behavior and reaction of your guinea pigs to decide the suitable range of sound for your piggies.

I feel that the ambient level noise usually works excellent with our piggies.

Before you read further, I have launched a book on guinea pig's diet with some amazing information that you cannot find elsewhere. I have added a ton of information and countless hours of work into it. Feel free to check it out!

How do guinea pigs react to music?

Different guinea pigs react differently to music. While some guinea pigs enjoy the music, others can get stressed out pretty quickly.

The type of music also plays a significant role in deciding whether your guinea pigs like it or not.

As they find the sound similar every time, they get used to it. The reaction to music also depends on two other factors: The unique personality of the guinea pigs themselves and the exposure in the early days.

Just like every human being carries their own personality and has their own likes and dislikes, the same is true with guinea pigs as well. Some guinea pigs are going to enjoy the music, and some won’t.

There is nothing much we can do about their personality. The only part that is in our control is exposure to music.

Exposure at an early age also plays a vital role as guinea pigs are much more adaptive when they are young.

If you expose them to some music from those days, they are likely going to respond well as compared to other guinea pigs, which were exposed later.

Music therapy does work better with some pets than others. Some owners claim that their guinea pigs enjoy soft music, and it often helps in keeping them calm and dragging them towards a good night’s sleep.

Although there is no scientific research that can prove the same, I ran a poll in the community, and most people in the community claimed the positive impact of music on their guinea pigs.

Are guinea pigs afraid of music?

Guinea pigs cherish some low music with minimal frequency fluctuation. There is no particular genre of music that appeals to guinea pigs.

It really depends upon the personality of your guinea pigs and the exposure they have got.

It all differs from one guinea pig to another. You can test the type of music your guinea pigs enjoy more.

Start by playing a soothing instrumental one at a low volume. You can also give a try to classical ones. You will see your guinea pigs are enjoying the soothing music.

Calming and Relaxing Music for Your Guinea Pig!

Significant and sudden change in music can also frighten your guinea pigs. However, there can be a few exceptions to this, you can have a rock-loving guinea pig as well, but in general, they do not enjoy this kind of music.

Concluding the question we began with, Do guinea pigs like music? Yes, guinea pigs do like music. While the choice of the song may differ, they do enjoy soft, calm, and low volume music in general.

If you are a music lover who enjoys listening or music playing in your house, you may want to go low or go out.

Guinea pigs don’t prefer loud noises around them as they get stressed out quickly.

If you introduce slow volume, calm music from an early age, your guinea pigs will enjoy it as they grow.

Adding the same later can be a little tough with some guinea pigs.

Also, make sure you watch out for any signs of restlessness in your guinea pigs and turn the music off of you notice anything wrong with them.

Also, Check Out Our Guinea Pig Essential Supplies Checklist To Get A Complete List Of Supplies For Your Guinea Pigs At Best Prices.

Hello, I am Saurav the founder of this blog that's all about guinea pigs. Guinea pigs are one of the most lovely animals I have ever owned. So, I decided to spread some love for them and that's how this blog came up. My motto with this blog is to help guinea pig owners understand their pets better so they can provide them with the life they deserve. I have also written a book called Guinea Pig Diet Plan which you can check out on Amazon.

Medical Disclaimer
Our site intends to provide you with the most accurate and updated information about guinea pigs. However, our site doesn’t provide you with any medical advice for your guinea pigs. For any medical assistance and advice, it is recommended to consult a licensed veterinarian. You can refer to our Medical Disclaimer page for more information.

Ginger is a root-like vegetable perfect for humans. It also contains essential Vitamins, Minerals, and antioxidants needed by our body. But, can guinea pigs eat ginger? Is ginger safe for them?...

Continue Reading
link to Why Does My Guinea Pig Have Eye Boogers? (Crusty Eyes+Cleaning)

Guinea pigs groom themselves well. They clean their body by licking their fur and using their paws to remove any dirt or mucus from the eyes. Sometimes the stains around the guinea pig's eyes are...

Guinea pig 101 is an ultimate resource for all guinea pig parents who are passionate about learning everything about their guinea pigs and provide them with a life they deserve.

Guineapig101.com is a participant in the Amazon Services LLC an affiliate advertising program designed to provide a means for us to earn fees by linking to affiliated sites. As an Amazon Associate, I earn from qualifying purchases made by our readers with no extra cost added to you all!